Application phase of the 2020 vector starts at Motek

While many stars and starlets can hardly wait for the spotlight of an awards ceremony, designers do not often rush into the limelight. But the jury of experts at the vector award is certain that it is precisely they and their innovations that deserve attention – after all, they shape everyday life in the industry and far beyond. That’s why developers are called upon to compete for the 7th vector award with their bold and extraordinary energy chain applications.

Energy chains have long been the standard in energy supply systems in many industries and markets. In thousands of machines and plants around the world, they ensure that cables and hoses are safely guided. They often master very special challenges. e-chains move at high speed, perform the wildest torsional movements or find their place in the smallest of installation spaces. And it is exactly these applications that the jury of the 7th vector award is looking for.

Receipt of applications start at Motek

The application phase of the award will be launched at the Motek automation show in Stuttgart. Until 28th February 2020, developers can apply online and submit texts, photos, and videos of their e-chain applications. International participation: “The last vector award two years ago was attended by 187 teams from more than 30 countries”, says Michael Blaß, Head of Business Division e-chain systems at igus. “Once again, we expect a large international field of participants.” After the application phase, it will be exciting: a jury, consisting of experts from professional associations, trade magazines, industry and science will sift through the entries. The boldest design with the greatest innovation will receive the golden vector award. The prize includes 5,000 euros, the award will be presented at the 2020 Hannover Messe.

Who will be the next winner?

With the launch of vector in 2008, the event brings the extraordinary achievements of designers around the world into the limelight every other year. The winners include a robot from Spanish machine manufacturer Loxin, which rivets aircraft fuselages (golden vector 2018), a machine made by Norwegian designers from Robotic Drilling Systems, which positions drilling elements on drilling platforms (golden vector 2016) and a transport system from the University of Duisburg-Essen, which moves via eight tensioned wire ropes on stacker racks (golden vector 2014). Though the applications are very different, they have one thing in common: they showcase the variety of different applications for energy chains and give inspiration to other designers. Michael Blaß explains: “The vector award impressively shows what is possible with energy chains today – even new and unexpected things. We are very excited about the surprises in store next year.”

Information about the award and the terms and conditions of participation can be found at www.igus.eu/vector. 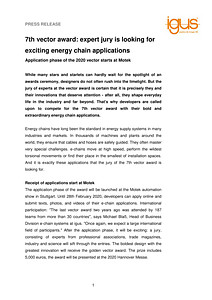 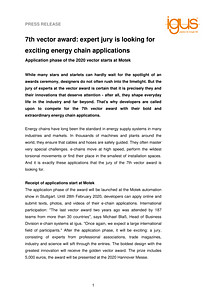 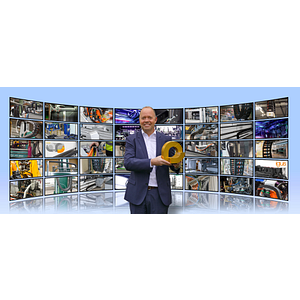