Robots are increasingly making their presence felt not only in the industry, but also in football. At the international robotics competition – the RoboCup – in Sydney this year, the team B-Human from Bremen showed what small robots can do in the popular sport. Here, the German Standard Platform league champion could fight for the world championship title against the reigning world champion from Leipzig.

When it comes to robotics, the annual RoboCup is the most important international competition. Teams of apprentices, students and faculty meet each other to test their new developments, share their experiences and knowledge. This year, the journey went around the globe to the Australian city of Sydney. During the four-day tournament the most varied types of robots competed in six disciplines and in 18 leagues. From football and maintenance/service up to logistics. In the field of popular ball sports alone, various types of robots play in ten leagues. In the Standard Platform league all teams play against each other, with five NAO robots in each team. In the final of the league, B-Human from the University of Bremen and the German Research Centre for Artificial Intelligence (DFKI – Deutsches Forschungszentrum für Künstliche Intelligenz) showed once again that they are among the best.

Showdown in the final

For the fourth time, Team B-Human and the reigning World Champions from Leipzig entered the final of the international RoboCup. While the team from Bremen were superior without conceding goals in the preliminary round and in the semi and quarter-finals, they were trailing 0-1 after the first half in the final. In an exciting second half, the small Bremen robots pulled together and won the world championship title with a 2-1 score at the final whistle.

Student projects such as B-Human are supported by igus as part of the young engineers support. The igus initiative supports young pupils, students and inventors in the development and execution of their technical projects. The motion plastics specialist develops and produces robots for the industry. With low-cost delta robots, linear robots and articulated arm robots, mid-sized companies can automate their processes with a low starting price. Various modular systems offer a wide range of maintenance-free and low-cost automation options.

The final game of B-Human against the HTWK Robots can be watched online: https://www.youtube.com/watch?v=4_BWQl91p9Y

Further information on igus’ young engineers support can be found on www.igus.eu/yes. 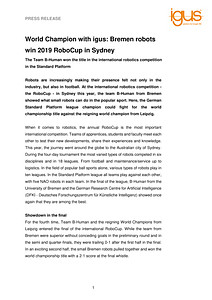 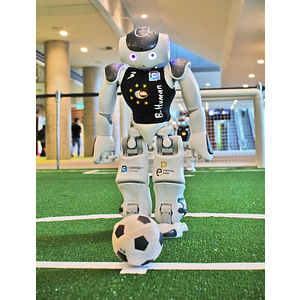