Up to 60 times the service life: igus produces the world’s first tribo-material for DLP 3D printing

With the iglidur i3000, igus is now presenting the world’s first 3D printing resin specifically for DLP 3D printing of wearing parts. This enables the additive manufacturing of particularly small, precise components with a service life that is 30 to 60 times longer than with conventional 3D printing resins. igus is also expanding its 3D printing service with DLP printers that achieve a resolution of 0.035 millimetres.

For components in the millimetre range, 3D printers that use Digital Light Processing (DLP) are particularly suitable. The process achieves a very fine resolutions under the various 3D printing technologies. Resolutions of just – 0.035 millimetres are possible, around half the thickness of a human hair. To enable this level of precision, a projector casts layer after layer of the 3D model onto the surface of a special liquid resin. The corresponding regions network under the influence of light. After curing, the construction platform is lowered by one layer so that the next exposure can take place. This creates tiny components layer by layer – including gears with tips just 0.2 millimetres thick. This tips have extremely smooth surfaces that require no post-treatment. With the new iglidur i3000-PR 3D printing resin, users can benefit from igus tribo technology from igus with this 3D printing technology, therefore significantly increasing the service life of their moving applications.

Service life can be extended by a factor of 60

Because as precise as DLP 3D printing works, it has so far had a downside. “A common problem is that tiny components made of commercially available 3D printing resins, such as gears for model-making, are not particularly robust and fail quickly,” says Tom Krause, Head of Additive Manufacturing at igus. igus has therefore developed iglidur i3000 for DLP 3D printing. It is tribologically optimized and therefore is much more wear-resistant. “We were able to prove in laboratory tests that the service life of iglidur i3000 is at least 30 times longer than 10 tested commercially 3D printing resins. In some applications, we even expect an increase in service life by a factor of 60.” Another advantage: The maintenance required for lubricating work is zero. Microscopic solid lubricants are integrated into the material. They are released independently during movement.

In addition to the 3D printing resin itself, customers can order components made from it directly from igus. igus is also expanding its 3D printing service. While customers could previously choose between the 3D printing processes of selective laser sintering (SLS) and fused deposition modeling (FDM), in future they will also be able to have components manufactured with DLP 3D printers. The finest details and even internal channels can easily be achieved. “We are now entering the beta test phase with the first customers. At the same time, we are working on ensuring that DLP 3D printing is also available in the online tool, which customers can use to upload STEP files for their components or configure gears in just a few clicks,” says Krause, adding, “Thanks to the combination of 3D printing and online configuration, weeks of waiting for wear-free special components are a thing of the past. In 2021, igus produced more than 200,000 abrasion-resistant components using 3D printing in Cologne, no minimum order quantity, up to 10,000 units. Especially in times of bottlenecks and disrupted supply chains, 3D printing is a viable alternative.“ 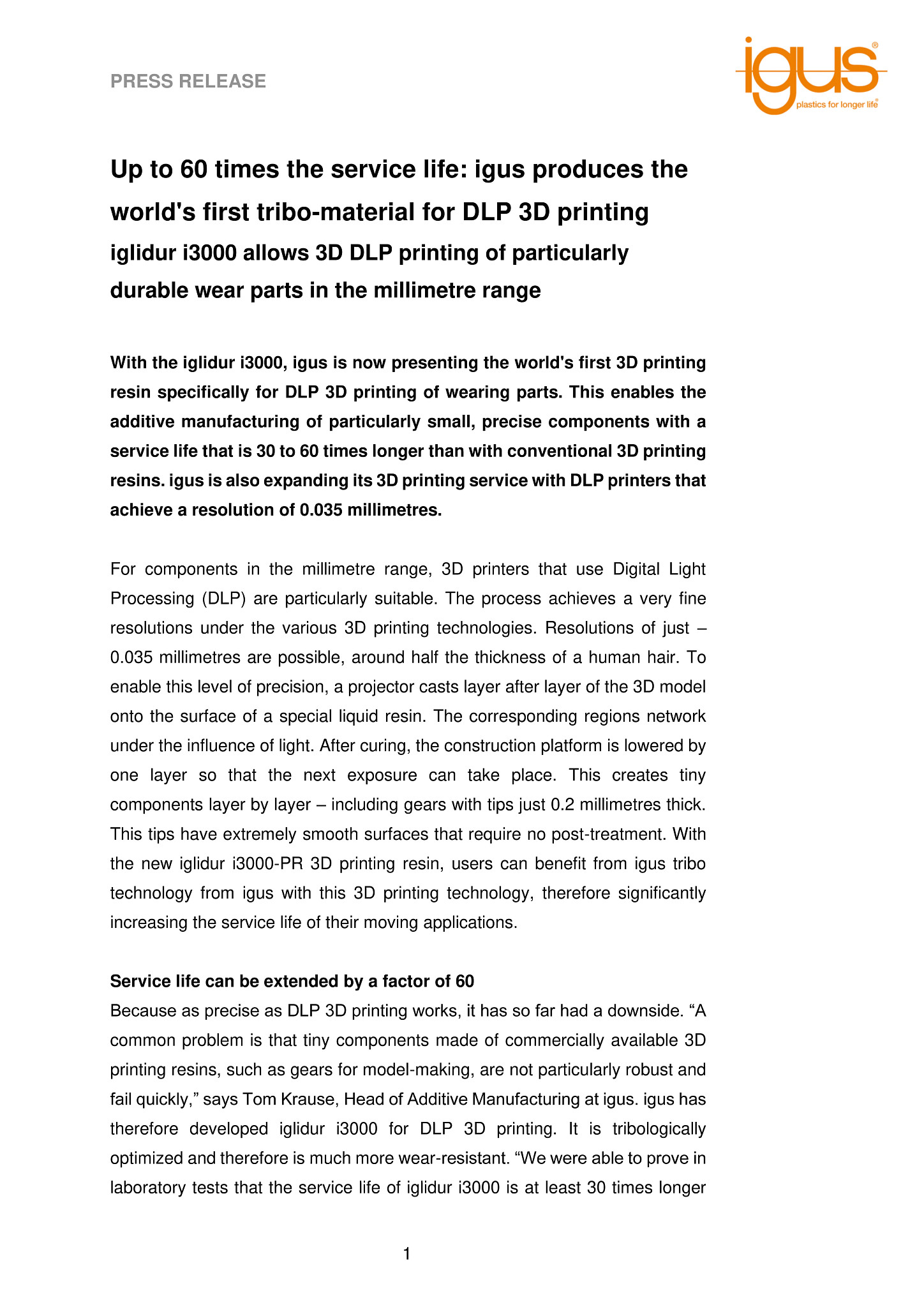 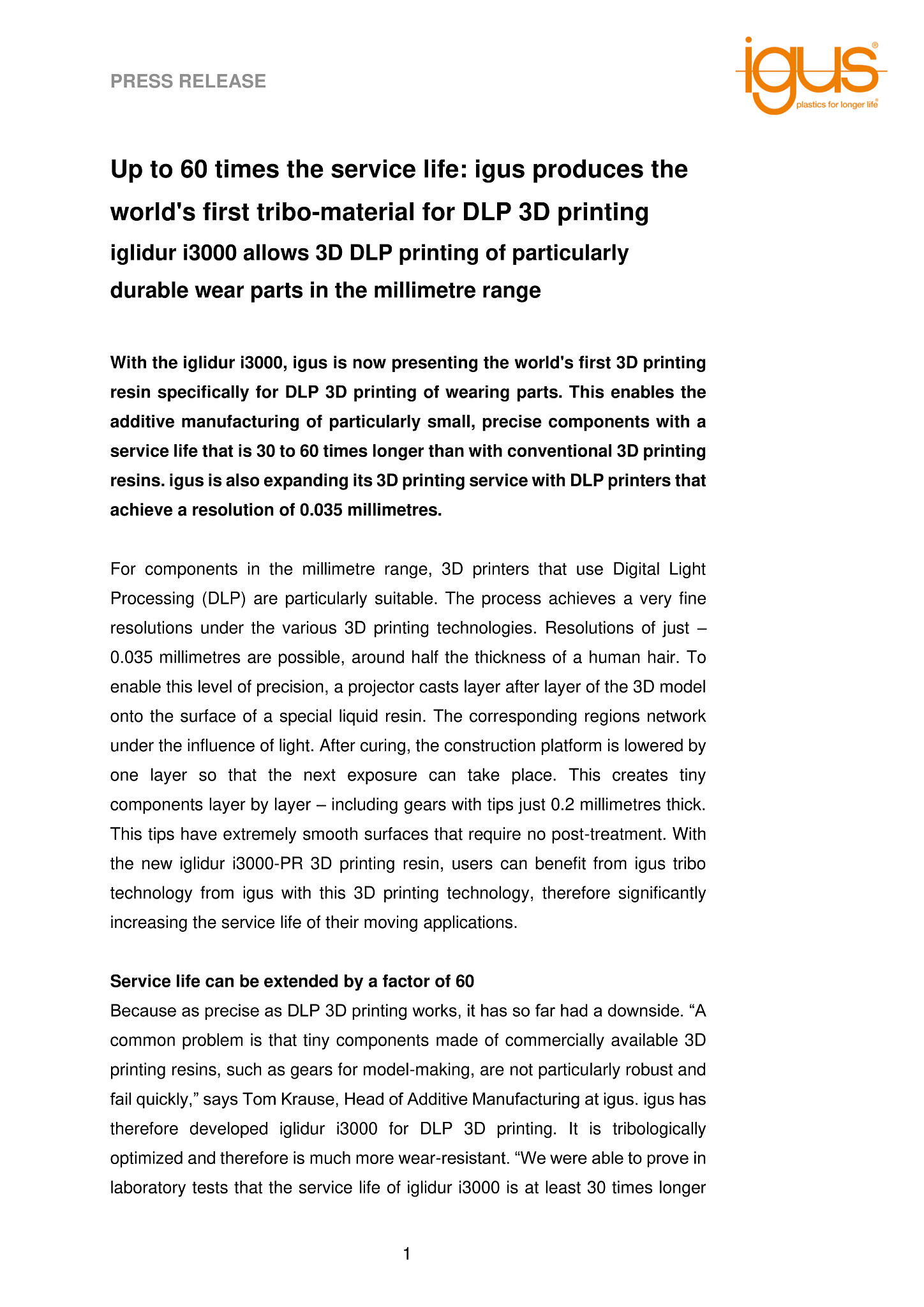 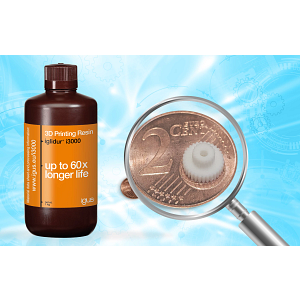