Acoustic walls shift as if by magic. Rows of seats emerge from the floor, ascending step by step like in a cinema. Gepber Szinpad, a Hungarian company, won the 2022 gold vector award with a multifunctional hall that transforms at the touch of a button. The judges at the Hannover Messe named the multifunctional hall the most spectacular energy chain application in the last two years – out of 233 entries from 36 countries.

It’s quite possible that the Gepber Szinpad engineers are Transformers fans. Their new multifunctional hall in the Hungexpo Congress and Exhibition Centre in Budapest strongly resembles the transforming ability of those science fiction robots, which transform into lorries and cars in a matter of seconds. At the core of the transformer hall are 43 mobile platforms with over 2,000 seats. Much like synchronised swimmers, the seat rows on 1,800 square metres assume different formations in just a few minutes – thanks to an electromechanical lifting device equipped with 3400 series energy chains and energy and data cables from the chainflex product range. At the push of a button, this creates open rows of seats, an incremental cinematic structure or a stage with an orchestra pit. This automation application allows several different major events to be held in a single day with minimal effort.

The hall operator is not the only one impressed by Gepber Szinpad’s engineering skill. The Hungarian company also convinced judges for the 2022 vector award – a prize that igus, the energy chain specialist, awards every two years to recognise the most fascinating energy chain applications in the world. The transformer hall impressed the representatives from specialist media, industry and research that made up the panel of judges, standing out among 232 entries from 36 countries. Gepber Szinpad received the 2022 golden vector award and €5,000 in prize money at the vector awards ceremony at the Hannover Messe. “This application shows in an impressive way how e-chains are used to put innovative automation ideas into practice”, says Michael Blass, CEO of e-chain Systems at igus. “And we are delighted to present the prize again this year at the Hannover Messe, which is celebrating a sensational comeback this year.”

However, the transformer hall was not the only exciting application. The 2022 silver vector award and €2,500 in prize money went to Rhenac GreenTec AG. Based in Hennef near Bonn, the company has built a gigantic turf lighting system for the Veltins Arena in Gelsenkirchen. The facility consists of a large gantry that moves up and down the edge of the football field on two rails. At the bottom of the gantry, there are lamps that supply LED growing light for lawn generation. To protect the outdoor system’s energy and data cables from UV radiation, rain and temperature fluctuations, the engineers use igus 5050RHD e-chains for the gantry travels. The e-spool system – an alternative to the cable drum that works without a slip ring – is also used for the vertical lamp holder adjustment.

In India, in the state of Punjab, in the village of Banawala, Talwandi Sabo Power Limited has built a coal-based thermal power plant with a capacity of 1,980MW. It has also designed a huge bucket wheel excavator that dredges heaps of delivered coal and transports it to the boiler on conveyor belts. It moves along a rail system equipped with one of the longest energy chain systems in the world. The power lines follow the bucket wheel excavator over a distance of 700 metres – incorporated in a heavy-duty igus 5050RHD series rol e-chain that protects them from flying coal. The judges recognised the application with the bronze vector award and €1,000 in prize money.

Water thousands of flower pots by hand? Dercks Gartenbau GmbH thinks that would cost too much time and money. So the company, based in Geldern, Germany, developed an automatic irrigation carriage. It moves along a rail at 18 metres per minute and uses its two booms with a span of 45 metres to supply plants with water and dissolved nutrients. For guidance, the engineers use 3500 series igus e-chains. The system works so precisely that it uses around 60% less water than conventional irrigation does. This earned Dercks Gartenbau GmbH the green vector award for sustainable projects and prize money of €1,000.

Detailed information about the competition, the award ceremony and all entries can be found at https://www.igus.eu/info/vector-award. 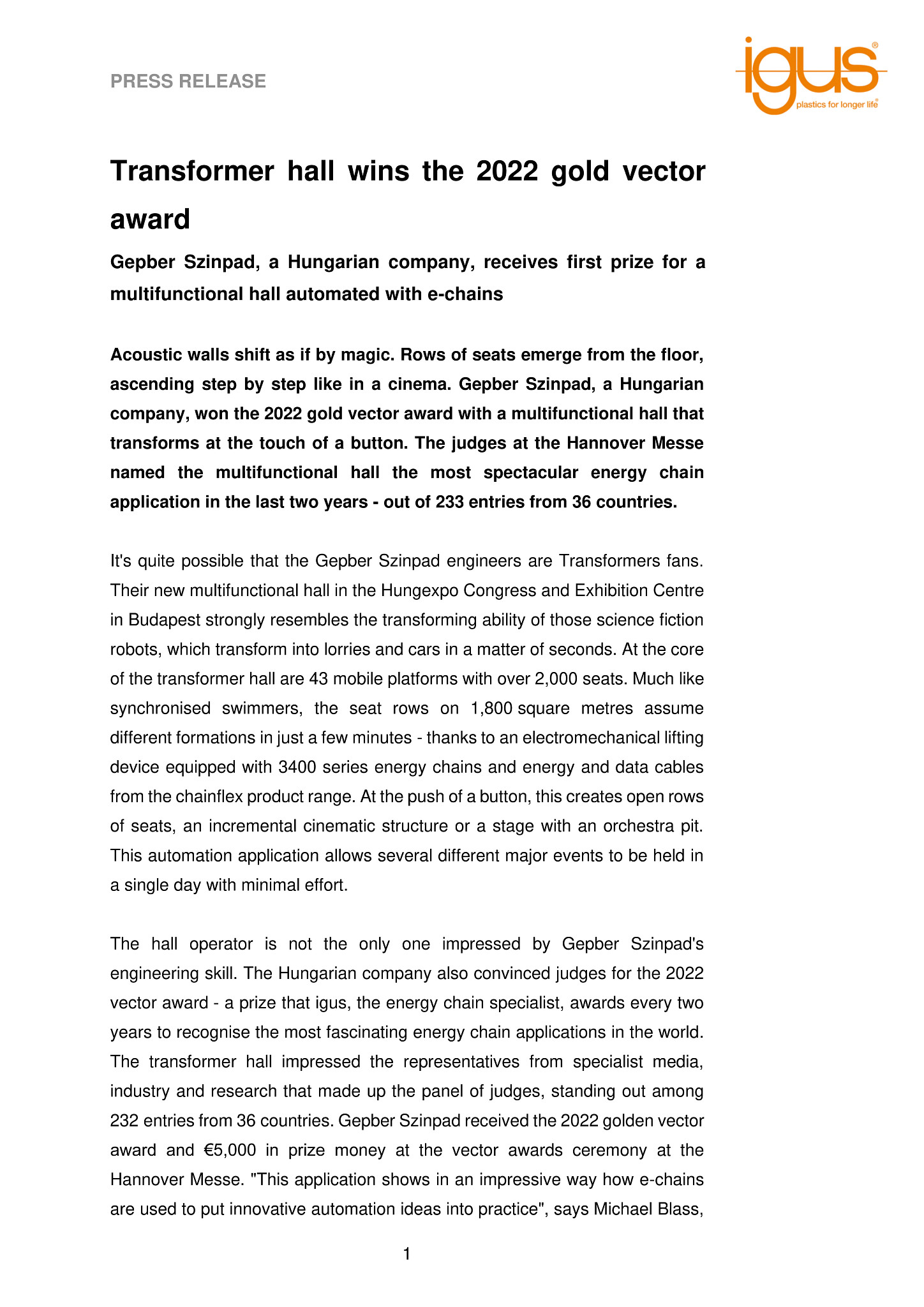 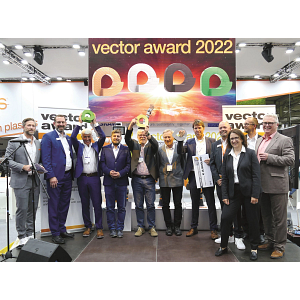 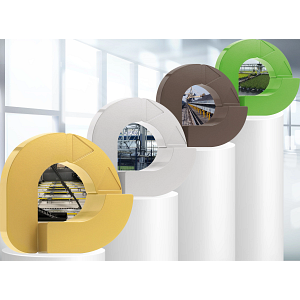