This is how even oil tankers become environmentally friendly sailing ships

A large proportion of ocean-going, coastal and inland vessels still run on heavy fuel oil and diesel. A burden on the environment that is no longer sustainable for shipping companies worldwide. To help the international shipping industry achieve the common goal of climate neutrality by 2050, engineers are therefore frantically developing greener drive technologies, such as electric motors or methanol- and ammonia-based fuels. However, a start-up called bound4blue from Barcelona is going in a completely different direction. The idea is to use the power of the wind with a novel drive system to reduce fuel consumption. To put this idea into practice, robust and durable components are needed that are not harmed by a harsh environment. This is no problem with the plain and deep groove ball bearings from igus.

The Spanish engineers’ invention consists of two complementary drive systems: wing sails and eSAILs. Behind them are about 20m high giants that are mounted on deck and that automatically adjust to the wind – similar to a classic sail. The wing sail looks like an aeroplane wing and is based on the same aerodynamic principles. The advantage is that it is a collapsible system that takes up little space on deck. The column-like eSAIL comes with a special technical feature: an electric suction mechanism on the back of the sail draws in wind while the boat is moving. This significantly reduces turbulence that is otherwise common. As a result, the airflow literally surrounds the sail, creating enormous lift with low drag. It is up to seven times higher than that of a conventional sail with minimal power consumption and therefore strong enough to take the strain off the engines. With the help of wing sails and eSAILs, fuel consumption can be reduced by up to 40%. According to the company, a payback period of less than five years is therefore guaranteed. To convince shipping companies of the benefits of this new drive system, the engineers also want to keep maintenance costs as low as possible. The system has to withstand high loads, salty seawater, high humidity and changing temperatures for years – without frequent repair interventions. These are demands that must be met not only by the largest but also by the smallest parts, such as the plain bearings. Hence, components from igus are used in the eSAIL.

Thus, the designers use cylindrical plain bearings made of the iglidur X material for the gear shafts and support rods of the sail. The advantage compared to metal bearings: the polymer bearings do not corrode even in direct contact with seawater. Unlike many bearings made of metal, shipping companies can also dispense with lubrication work. As an important component in igus materials, solid lubricants ensure that maintenance-free dry operation is possible without a single drop of lubricating oil. Bearing technology from the motion plastics specialist is also used in the pilot system – a sensor instrument for measuring atmospheric pressure. Here, the engineers rely on radial deep groove ball bearings of the xirodur B180 series. The bearings consist of four mainly injection-moulded components: inner and outer rings made of high-performance plastic and a stainless-steel cage and balls. They also operate without lubricants, are resistant to seawater and can be used in temperature ranges between -40 and +80°C. A positive side effect: the bearings are approx. 60% lighter and up to 40% more cost-effective than comparable metal bearings. 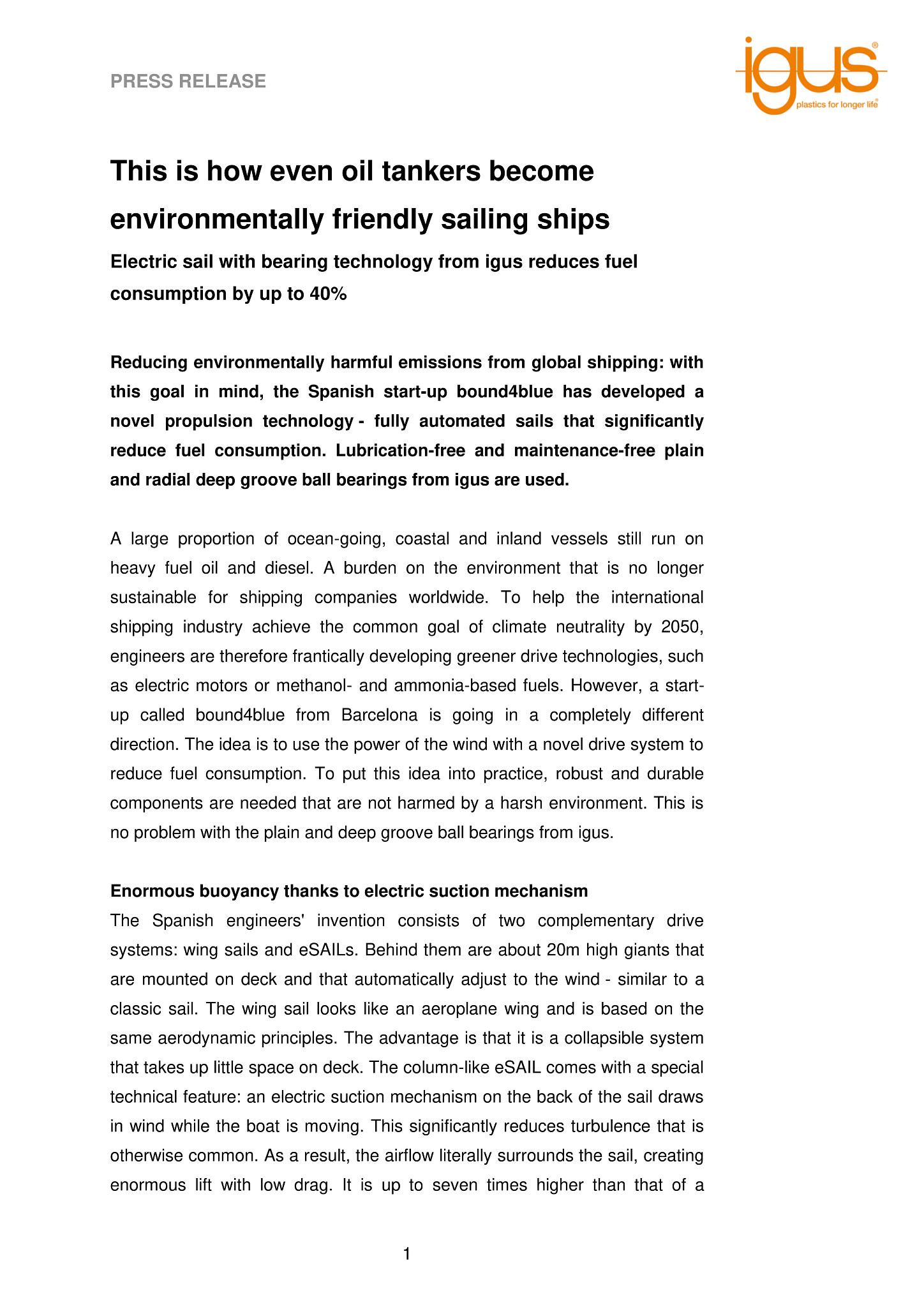 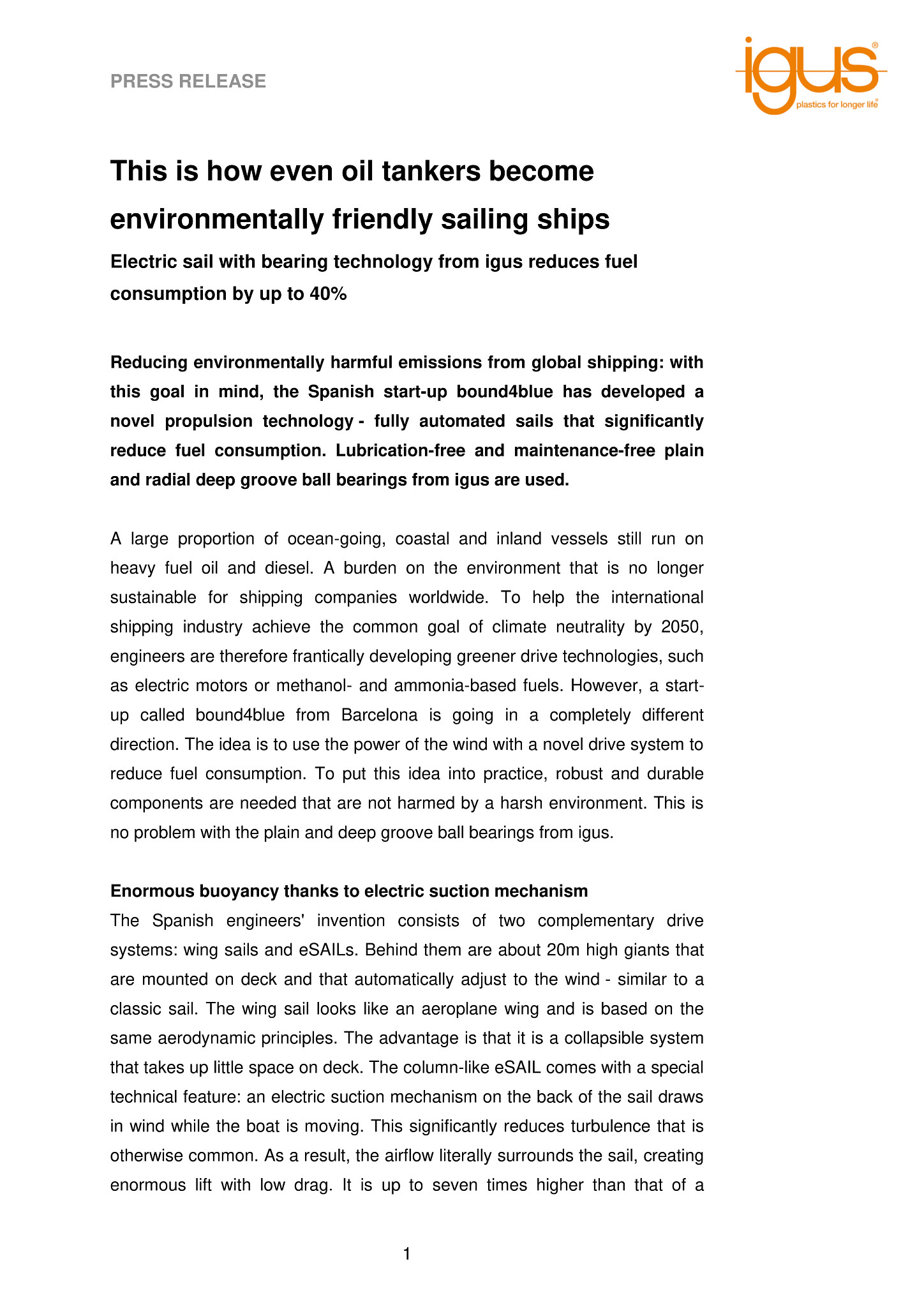 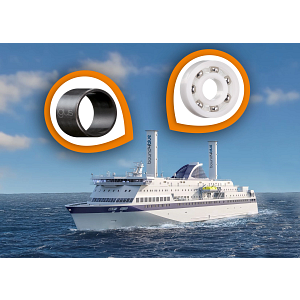