Advanced Recycling pioneer Mura Technology is making great strides in building the world’s first HydroPRS plant that will be commissioned in early 2023.

Recovering crude oil from plastic: British company Mura Technology (Mura) is pursuing this goal with the HydroPRS process to advance the circular economy of plastics. This is a concern that motion plastics specialist igus also shares. igus has been supporting Mura’s project as an investor since 2020. The first HydroPRS plant for the chemical recycling of plastic waste is currently being built by Mura’s subsidiary ReNew ELP in Teesside, England. The advanced recycling pioneer is making great progress and will put the plant into operation at the beginning of 2023.

Construction of the first HydroPRS plant for recycling plastic waste began in April 2021. The process makes it possible to recycle unsorted plastic waste with a low CO2 footprint. HydroPRS is resistant to organic contaminants such as paper and food residues, making a wide range of plastic waste suitable as feedstock. This is crushed in the company’s own material processing plant and cleaned of impurities such as glass, stones and metals. ReNew ELP continues to make significant progress in building the plant, although the pandemic and raw material shortages, as in other sectors of the economy, had an impact on the project. Following excavation and civil engineering work, concrete has been poured to erect the foundations and substructures for the buildings and facilities in recent months. The first plants such as storage tanks for distillate were delivered to the construction site in July. In addition, a part is taken to local warehouses or stored with suppliers on site. This helps in assembly planning, as the equipment is available at any time and can be installed efficiently. The next major construction projects are the material processing plant and the main process plant. In July, Mura began programming the control software for the HydroPRS plant, which should be completed by October.

The goal is to have ReNew ELP site commissioned at the beginning of 2023. In the first phase, the plant will have a capacity of 20,000 tons, which will be increased to 80,000 tons per annum. By way of comparison, according to estimates by researchers the largest garbage swirl in the world, the Great Pacific Garbage Patch, which floats in the Pacific Ocean between Hawaii and California, currently consists of around 80,000 tons of plastic waste. In the future, further HydroPRSTM plants are to be built worldwide – including Germany. Several possible sites have been identified and one is already under development and is expected to be operational on or before 2025. The proposed plants in Germany will have the capacity to process between 50,000 and 100,000 tonnes per site. Mura’s business model includes its own locations in Great Britain, Europe and the United States as well as worldwide licensing opportunities through Mura’s partner KBR. Other partners such as DOW Chemical, Chevron Phillips Chemical and Mitsubishi Chemical have been added., igus has been a partner of Mura since 2020 and has invested 5 million euros in the project.

Working together to achieve greater sustainability

Mura is already working with suppliers to provide the HydroPRS plant with plastic waste. They collect plastic waste from households and cities and will deliver it to Mura in the future. But Mura goes one step further and actively drives the development of this new industrial sector by working with policymakers and other stakeholders. To illustrate the positive environmental impact of its own HydroPRSTM plant at the Wilton site, Mura is also working with independent partner Warwick Manufacturing Group (part of the University of Warwick) on a life cycle analysis of the plant, which is due to be published in autumn 2022. “We are aware of the great opportunities offered by this ground-breaking technology and are supporting Mura to help chemical recycling make a breakthrough. Together, we want to advance the circular economy of plastics in order to conserve precious resources and raw materials,” says Frank Blase, CEO of igus GmbH. For over 50 years, igus has already regranulated 99 percent of the plastic waste generated in production and in 2019 also launched its own recycling program for disused energy chains. The first products created this year from up to 100 percent recycled material were the cradle-chain and iglidur ECO plain bearings, Also new is the igus:bike project for sustainable urban mobility. The concept includes a solid plastic bicycle that is completely lubrication-free and rust-free and whose frame and wheels can also be made from post-consumer waste. With the igus:bike platform, igus also wants to promote know-how around plastics in the global bicycle industry and thus promote the circular economy internationally. 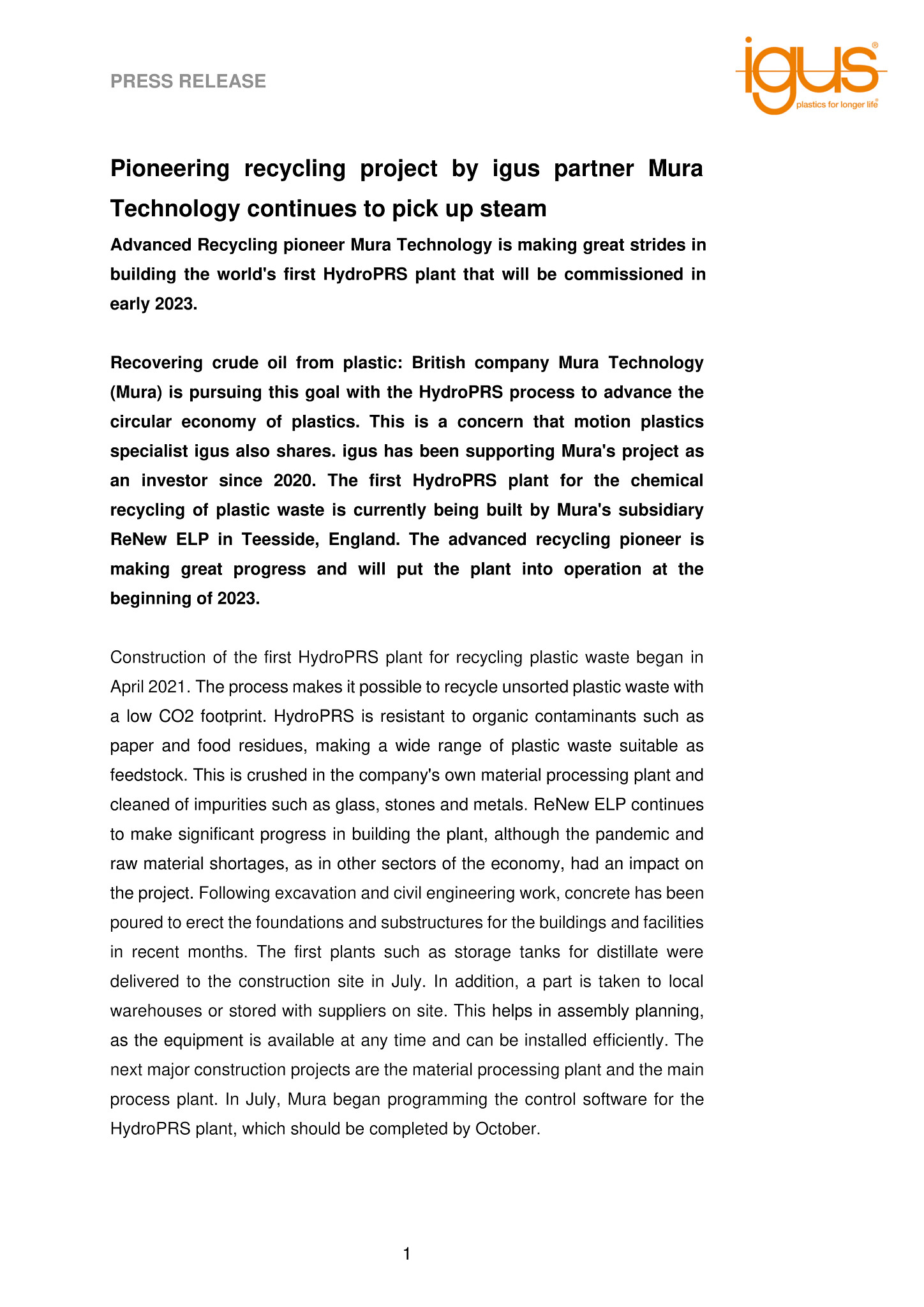 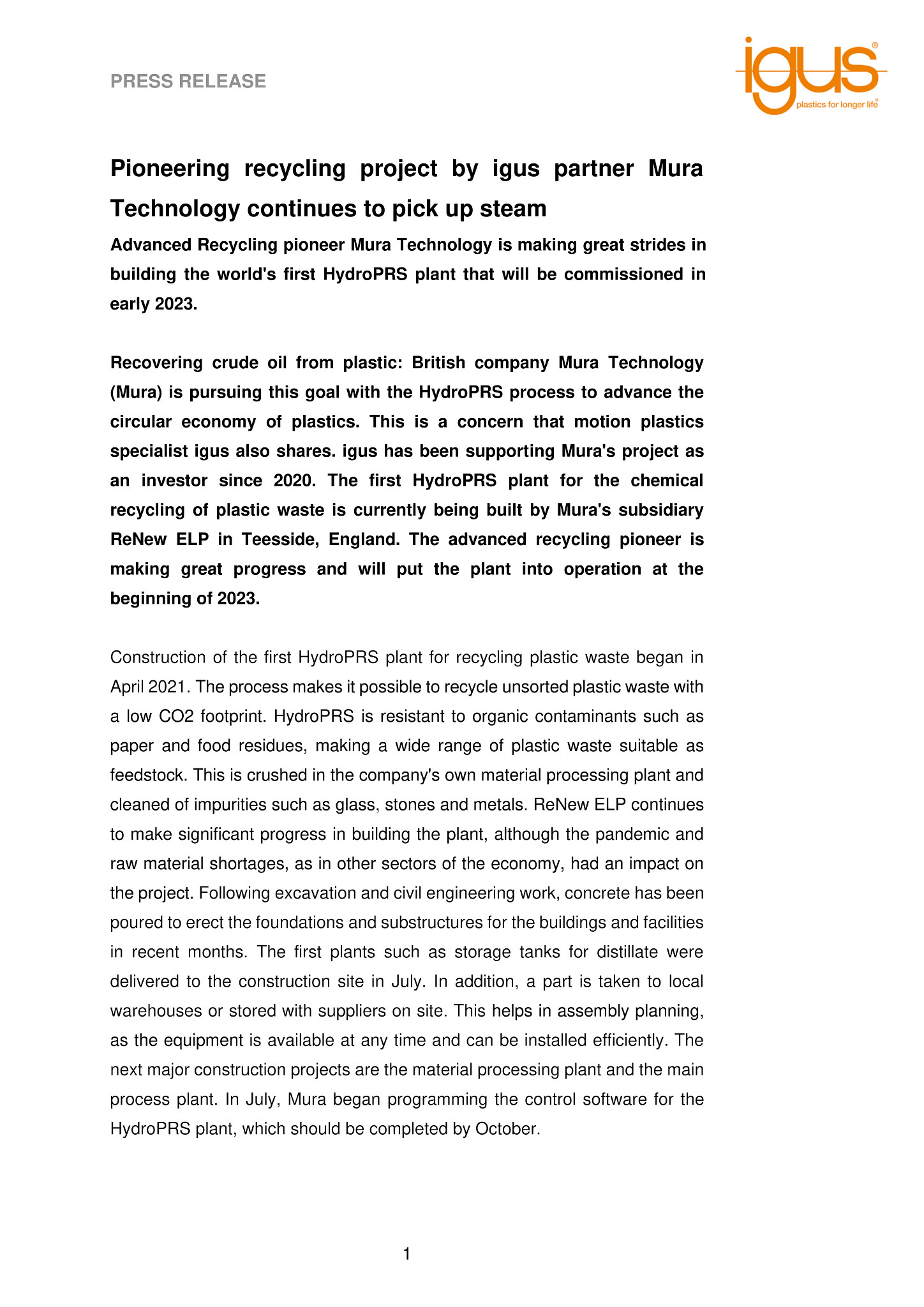 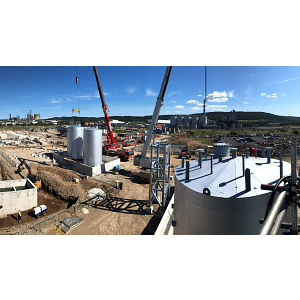