Many designers of special machines and prototypes are under pressure. If they urgently need custom toothed belt discs beyond off-the-shelf products, delivery often takes several weeks. A waiting time that the 3D-printing service from igus has reduced to 48 hours. Users do not have to compromise on quality. On the contrary, the test series in the igus laboratory showed a significantly longer service life of the tribo-material for laser sintering compared to milled and injection-moulded POM parts.

Toothed belt discs are as common as sand on the sea. After all, toothed belts are used thousands of times. They can be found wherever clearance-free and strong power transmission of rotating parts is required, for example in linear drives of printers, robots and packaging machines. Often, they are used as a standard component. However, if an individual variant is required, these special parts have to be manufactured by milling machines and lathes from, e.g. aluminium or steel. In some cases, tools for the injection-moulding machine have to be produced first. “The delivery times for such custom parts often amount to several weeks. A waiting time that is a thorn in the side of many designers because it often throws schedules into disarray”, says Tom Krause, Head of Additive Manufacturing at igus. Tom Krause says, “To shorten delivery times for special-format toothed belt discs, we now offer manufacturing by 3D printing, reducing delivery times from several weeks to just 48 hours. Designers can hardly get their hands on these components any faster.”

At the same time, users do not have to forego robustness. This has been proven, among other things, by an extensive test series of spur gears that igus manufactures using selective laser sintering (SLS). In the in-house 3,800 square metre test laboratory, the high-performance polymer iglidur i3 competed against an injection-moulded and a milled spur gear made of polyoxymethylene (POM) in a pivot test at a speed of 0.1m/s, a torque of 2.2Nm and an extreme temperature of 1,440°C. All spur gears had a width of 16mm and 30 teeth. The result: the milled spur gear failed after 12,500 cycles, and the injection-moulded variant after 4,000 cycles. The gear made of iglidur i3, on the other hand, withstood almost 20,000 cycles. “In addition to the all-rounder iglidur i3, we also offer the FDA-compliant version i6 for the food sector and the electrostatically dissipating variant i8 for explosive areas”, says Krause. “All high-performance plastics are robust and wear-resistant enough to be an economical and reliable alternative even to steel and aluminium toothed belt discs.”

The production of toothed belt discs with flanged wheels is very complex. These are additional components, ring-shaped outer walls mounted on the belt pulley to prevent the belt from slipping sideways. Milling machines are often not flexible enough to produce toothed belt discs with flanged wheels from a single piece of metal. The 3D-printing service from igus, on the other hand, speeds up manufacturing because models with flanged wheels are printed in one piece without tools. However, not only producing, but also ordering individual toothed belt discs is particularly fast at igus. Designers can upload a CAD model of the toothed belt disc via drag-and-drop on the website of the 3D-printing service to immediately determine a price and place the order. If they don’t have a digital model, they can configure one within minutes, using the belt pulley configurator. All that users have to do is enter characteristic data – such as the desired belt profile or the number of teeth. The configurator then creates a STEP file that users can upload to the website at one. They can also place an order immediately. “Calling back and forth or sending CAD models by e-mail are such time-consuming steps that have become much easier thanks to the online configurator. This has enabled us to speed up the ordering process many times over and give designers a further time advantage.” 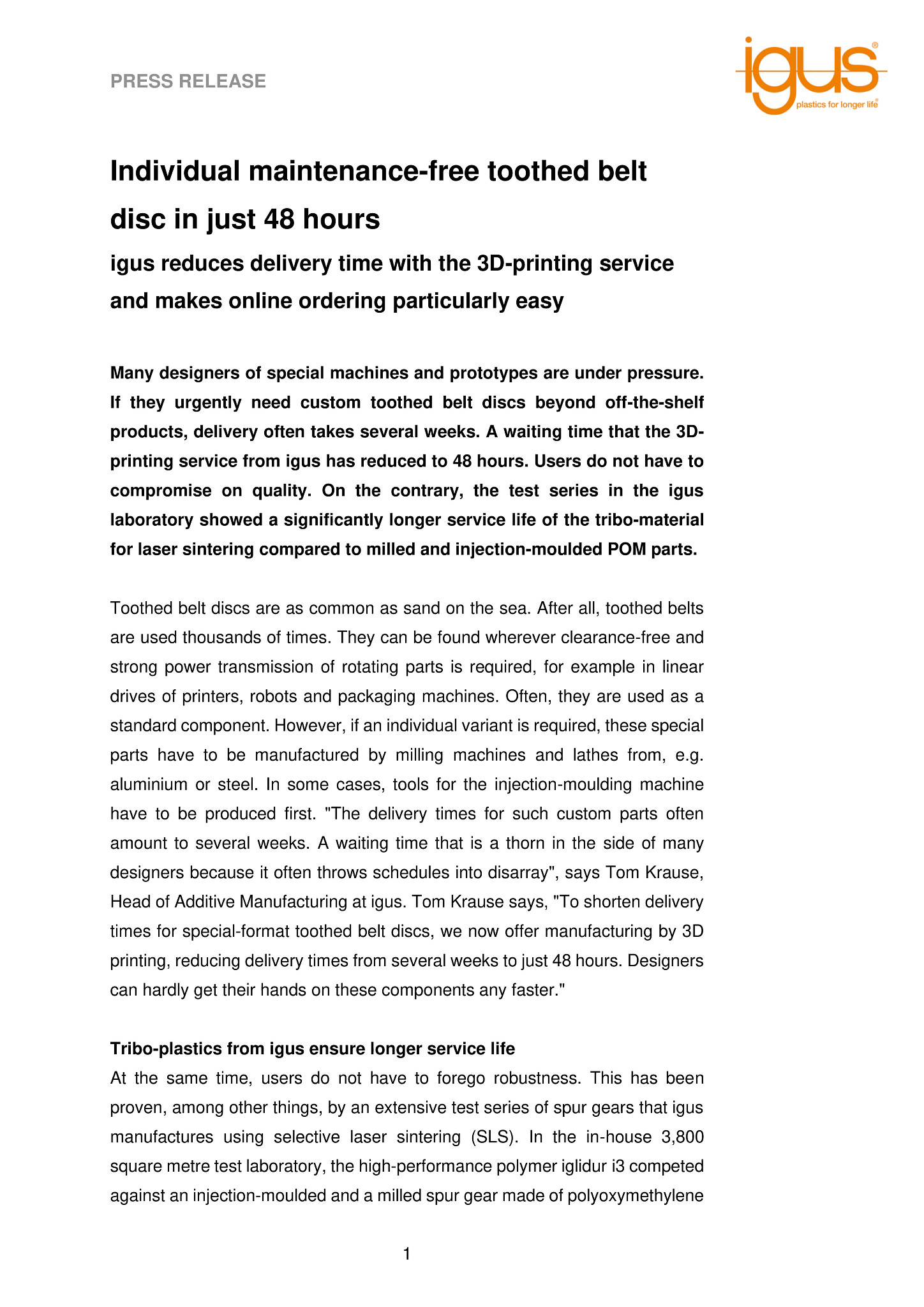 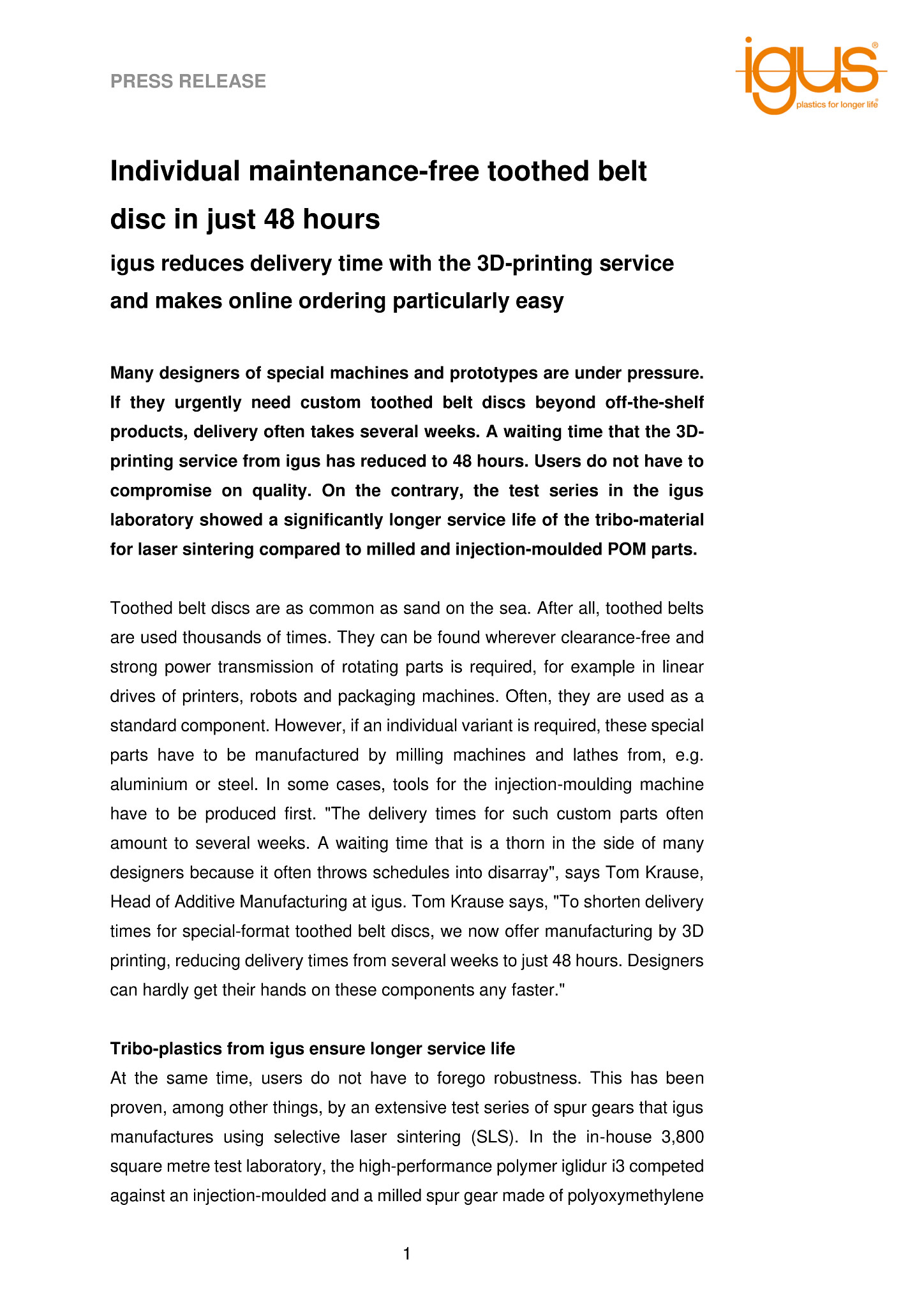 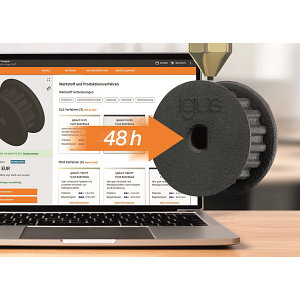