Use instead of waste: Hydrothermal Plastic Recycling Solution (HydroPRS), plastic waste that would otherwise pollute the environment, can be reused as a valuable raw material through chemical recycling within 25 minutes. To advance this revolutionary technology worldwide, motion plastics specialist igus is now increasing its investment in Mura Technology to around 5 million euros. Another major industrial partner, KBR, partnered with Mura in January.

It is one of the most pressing challenges of our time: 8 million tonnes of plastic enters the world’s oceans every year; much of the plastic is incinerated and only 14 per cent is recycled. This results in an economic loss of 80 billion dollars per year. At the same time, new plastic is continuously being produced from petroleum, which is associated with high CO2 emissions. This use already accounts for 6 per cent of global oil production, which is expected to increase to 20 per cent by 2050. With the “Hydrothermal Plastic Recycling Solution” (HydroPRS for short) a groundbreaking new technology is waiting in the wings that will enable an entry into a sustainable circular economy for plastics. HydroPRS has the potential to recycle all types of plastic and prevent plastic from being burned or landfilled and polluting the environment. It is estimated that each tonne of plastic processed via advanced recycling could save 1.5 tonnes of CO2 compared to incineration. To convert plastic waste into valuable chemicals and oil, HydroPRS utilises the Catalytic Hydrothermal Reactor technology (Cat-HTR™) developed by Licella Holdings Limited using water, heat and pressure. This method is particularly interesting where mechanical recycling has not been successful so far, for example, with mixed and contaminated plastics.

Valuable resource instead of harmful waste

This potential has excited motion plastics specialist igus, who last year invested in a company that plans to commission the first commercial HydroPRS plant in 2022. Now igus has increased its investment in Mura Technology to a total of €5 million. “We know about the great possibilities that plastic has. Our tribo-polymers are used millions of times in moving applications all over the world, where they reduce weight, maintenance and lubrication”, says Frank Blase, Managing Director of igus. “We’re helping to make plastic a material that does not harm our world but helps through almost 100% recycling.” Mechanical recycling is an important step in this direction. For example, igus has been regranulating 99 per cent of the plastic waste generated in production for over 50 years. At the end of 2019, igus additionally initiated the chainge programme: igus takes back energy chains at the end of a machine’s life, irrespective of the manufacturer, pays a voucher, regranulates the plastic and then processes it again. “In the future, chemical recycling will be able to play out its advantages where classic recycling cannot get anywhere. That is why we are supporting Mura in this start-up phase to help this groundbreaking technology achieve a breakthrough worldwide.”

Global success through investment and co-operation

Mura Technology has now also succeeded in appointing KBR as an exclusive licence partner for further expansion. KBR, with its 28,0000 employees, is active in more than 80 countries, among other things as a planner, plant builder and operator of refineries and chemical plants. “We knew that as a start-up company we had developed a highly innovative and promising technology”, Oliver Borek, Managing Director Europe at Mura Technology, points out. “However, it was also clear to us that we would never be able to roll it out on a large scale under our own steam. Thanks to igus’ investment in this crucial phase, as well as the establishment and expansion of further partnerships, we now have this opportunity.” Construction of the first HydroPRS plant by Mura at the UK’s Wilton International industrial site has now started and is expected to be operational in the second half of 2022. A total of four Catalytic Hydrothermal Reactors will be built there to process over 80,000 tonnes of plastic waste annually. In addition, further plants are planned in Germany, the USA and Asia.

You can see how plastic can be recycled with HydroPRS in this video:
https://www.youtube.com/watch?v=eouFBpVVGEQ 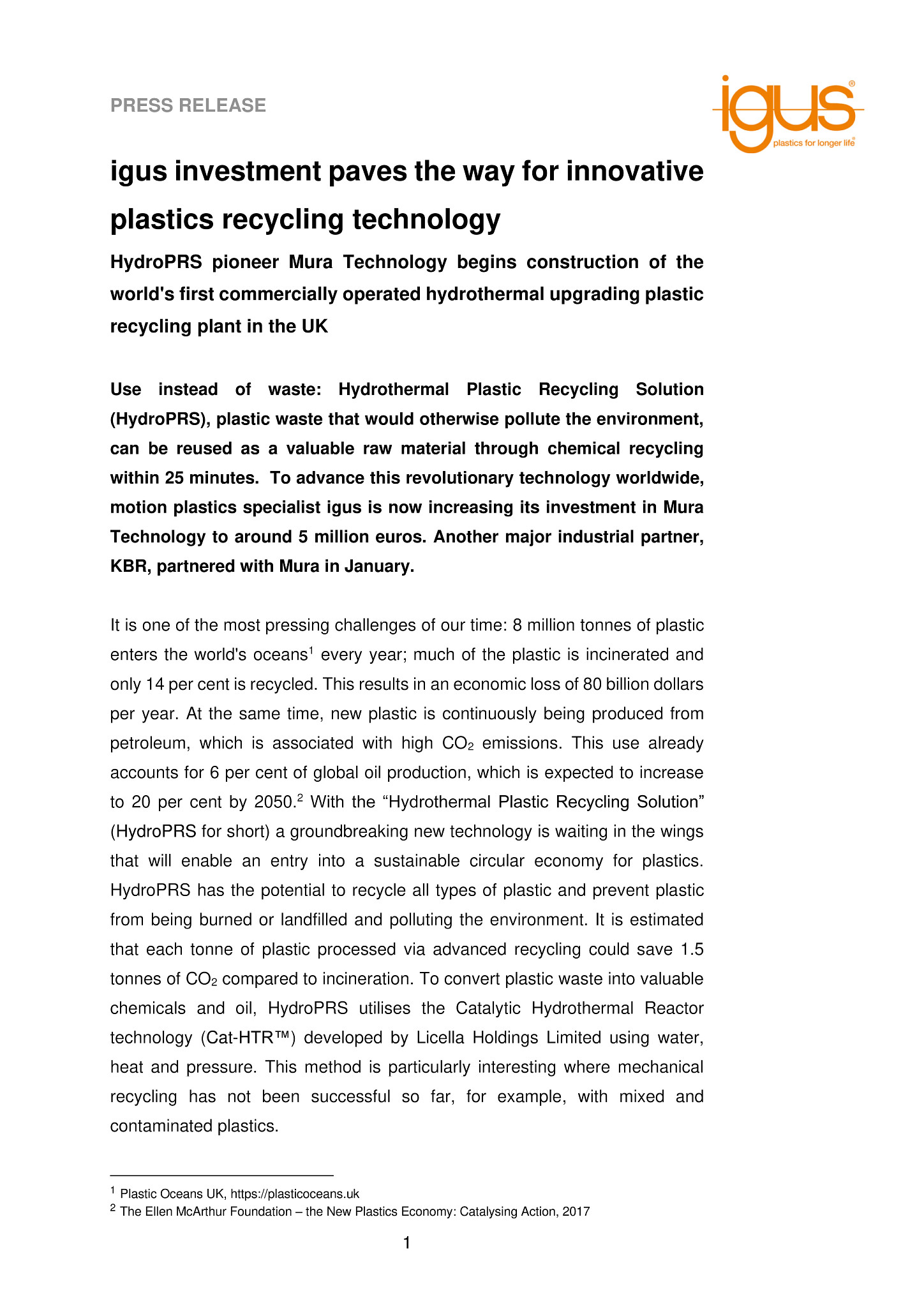 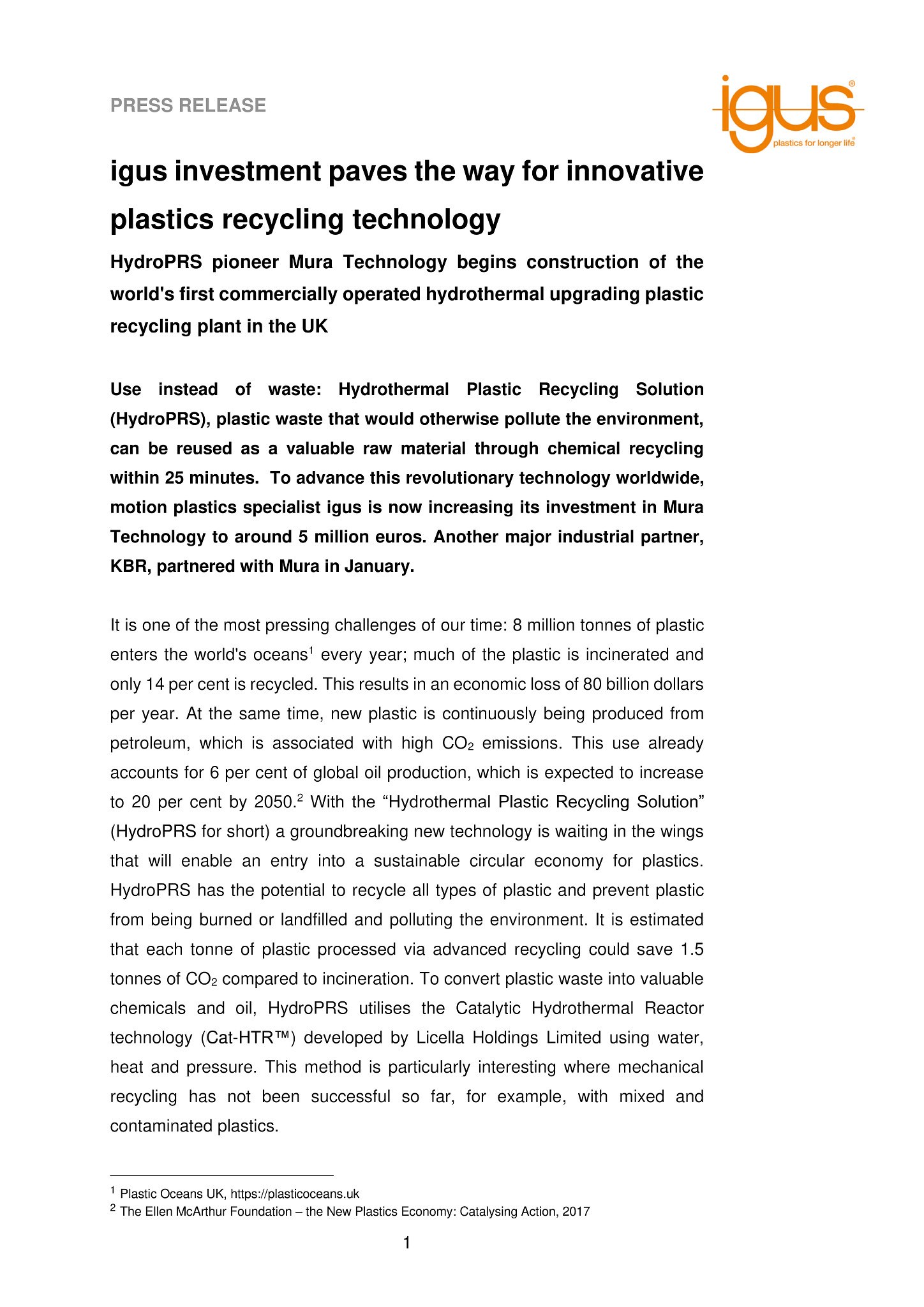 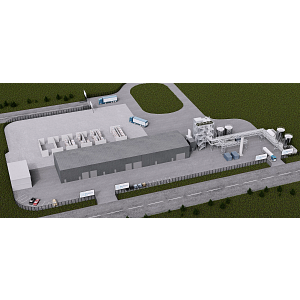