At Hannover Messe 2022, igus presents the first prototype of a humanoid low-cost robot

Man, machine – or both? Humanoid robots are no longer science fiction, they are reality. igus has been researching humanoid robotics for some time and is now presenting a prototype of the motion plastics bot at the Hannover Messe: a humanoid robot that combines the advantages of high-performance plastics and Low Cost Automation.

Robots have become an integral part of our everyday lives. Since the transition to Industry 4.0, more and more tasks have been automated – and new forms of robotics are benefiting. But robots can also make things easier in our daily routines. A humanoid that is both functional and friendly and has human features can support humans not as a machine, but as a partner. There has been steady progress in humanoid robotics research and development. For example, a research team at the Chemnitz University of Technology is developing an e-skin – a touch-sensitive electronic skin that could make humanoid robots even more human-like. Driven by the question of the direction into which robotics can develop, igus has spent some time working on its own vision of a humanoid robot – the motion plastics bot. “With the igus ReBeL and our drytech range, working components were already available to enable a robot to move. The humanoid robot is a project we worked on with the robotics experts from TruPhysics, a Stuttgart-based start-up, who assembled the intelligent humanoid from our motion plastics and other components. It is available there under the name Robert M3”, says Alexander Mühlens, Head of the Automation Technology and Robotics Business Unit at igus. “We hope the bot will demonstrate the interplay between integrated intelligence and our products made of high-performance plastics – at an affordable price.”

For a long, trouble-free service life without maintenance, the igus tribo-polymers in the motion plastics bot offer a clear advantage: no lubricants needed. At the same time, high-performance plastics allow a lightweight design. They reduce the motion plastics bot’s weight to just 78 kilograms at heights of up to 2.70 metres and a span of 1.50 metres. The motion plastics bot features a self-propelled AGV (automated guided vehicle), a telescopic body and a head with an integrated screen and avatar for interactive communication. Another central component is the igus ReBeL, a service robot with cobot capabilities that is used as the bot’s arms. The fully integrated tribo strain wave gear with motor, absolute-value encoder, force control system and controller constitute the core of the ReBeL. The motion plastics bot moves at a walking pace and has a load capacity of 2 kilogrammes per arm. It is controlled as an open-source solution via the Robot Operating System (ROS). This is because the entire igus Low Cost Automation product range can be mapped in the ROS. By studying the motion plastics bot, igus is combining the advantages of their high-performance plastics for movement and their Low Cost Automation expertise to further advance the development of the next generation of robots.

Not just a machine, but a lifelong companion

“We see a lot of potential in humanoid robots. But our world is built by people for people. So instead of just using individual automation parts, it makes sense to study humanoids and androids. The question is when the market will be ready”, says Alexander Mühlens. Human-like robots can perform dangerous as well as simple and monotonous tasks. In a professional environment, work can go beyond the mere pick & place performed by robot arms. In the household sector, a bot can replace several robots: it could vacuum autonomously, mow the lawn, go shopping, cook, do laundry and perform all sorts of other tasks – even caring for the sick. It would be not just a machine, but a companion that could provide people relief for a long time. “Such a robot has so far been associated with high costs, but if you take into account the possible service life, it would pay off in the long term”, says Mühlens. “It is our goal to use motion plastics components to demonstrate simple, cost-effective solutions for humanoid robotics.” 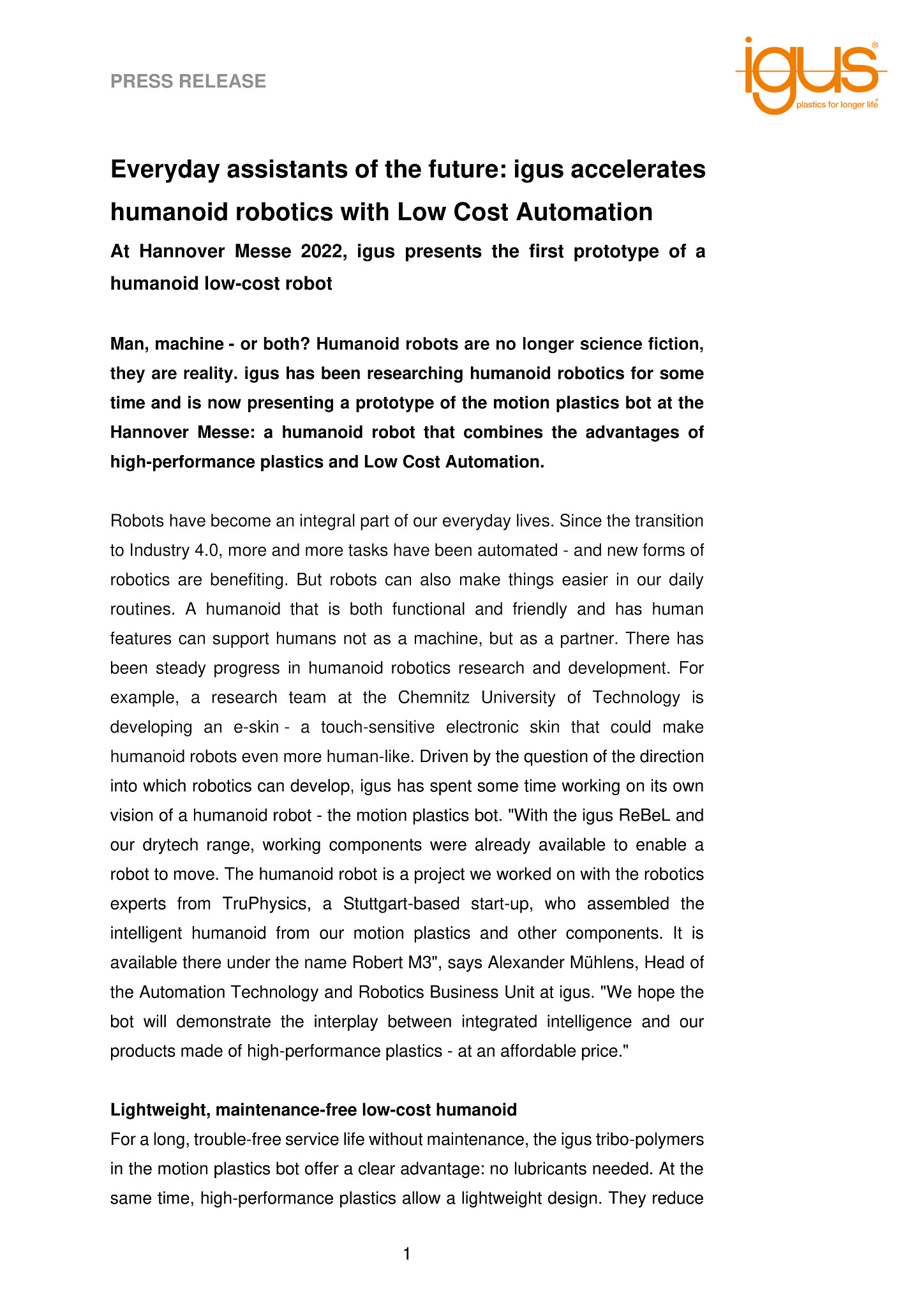 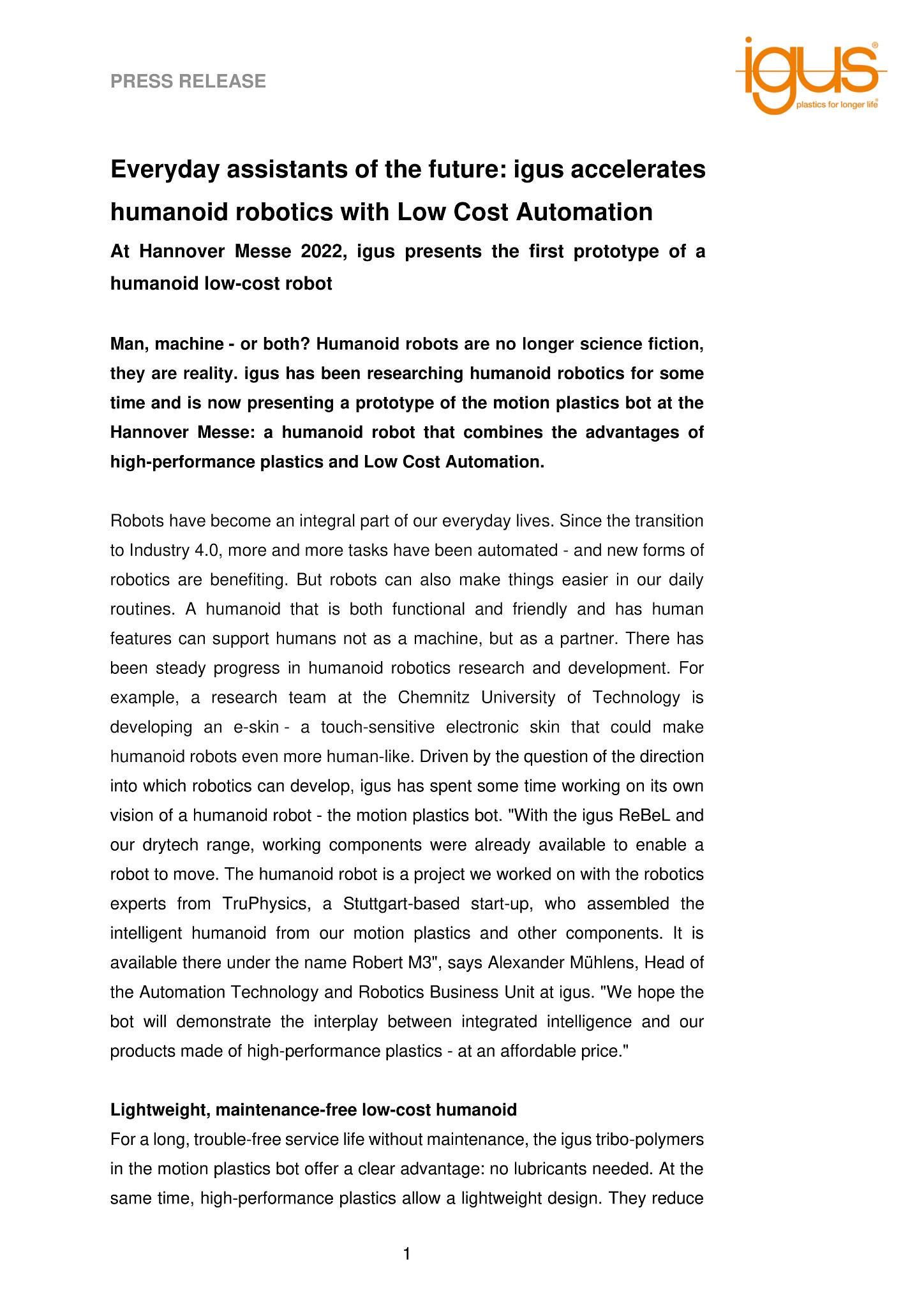 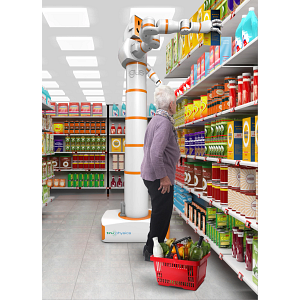